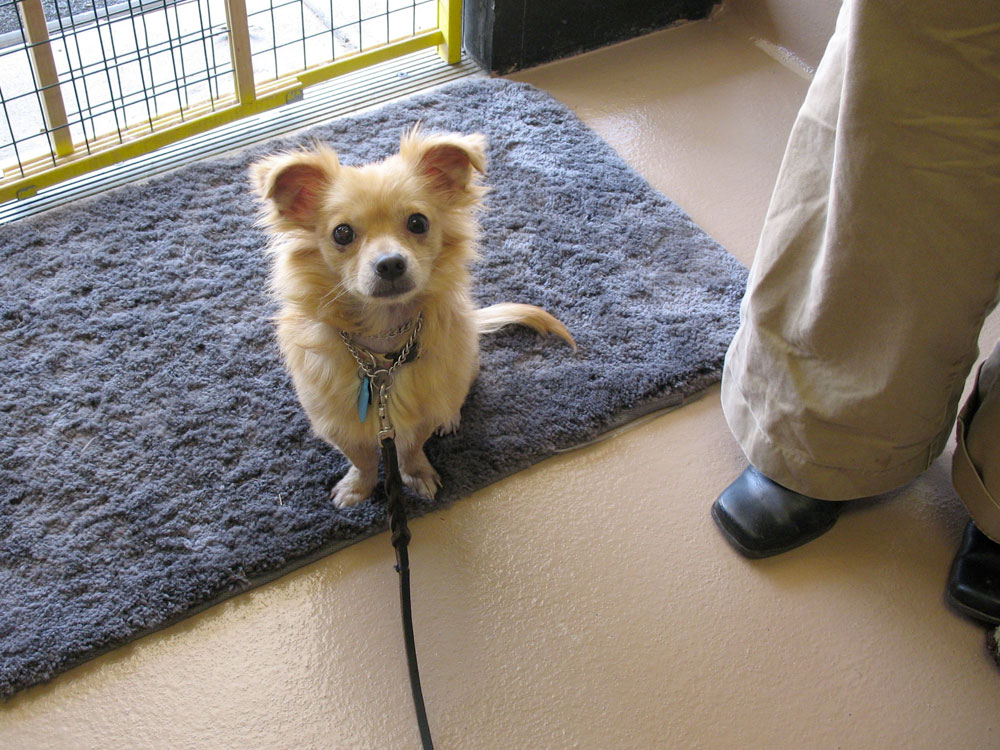 It’s time to put puppy mills out of business!

What’s the big deal about pet store dogs?
The dogs and pups in pet stores come from large-scale breeding facilities called puppy mills. These places exist across the country solely to churn out large numbers of “purebred” pups like livestock, and they, like the stores they sell to, are only interested in money, not in producing quality pets. In a world overrun with surplus dogs and cats, the only responsible reason to breed dogs is to improve the breed, and/or to provide healthy, temperamentally-sound puppies to people wishing to become dog owners. Puppy millers do not take genetics or health clearances into account. Typically, a male and a female “breeding pair” are caged together in a small space with a wire floor (for droppings and urine to pass through–necessitating less clean up duties for workers) and this is where these dogs live their whole lives. They mate every time the female is in season (about every six months from the time she is six months old until she collapses from exhaustion, usually around 8-10 years), and when the pups are 5 weeks old (WAY too soon!), they are removed from the cage and shipped across the country to waiting pet stores. Then the cycle repeats.

Not only do the millers not care about their breeding stock having any real quality of life or producing quality pups free from birth defects or temperament problems, 5 weeks is way too young for puppies to leave the mother dog. The dogs that end up in pet stores are ridiculously overpriced, often sick, and often harbor genetic problems that will conveniently not appear until the buyer is already attached. The pet store proprieter is counting on this, and believe me, he is laughing all the way to the bank. Some of the dogs are not even purebreds, and although I love a mutt, why would you pay that much for a mixed breed?

Sadly, many people are unaware that buying from pet stores that sell puppies and dogs keeps the cycle going, and it will continue until people stop buying dogs this way. Every pup sold frees up space for another, and why wouldn’t the store buy more? The markup is 200-300%, the store is not obligated to give buyers any helpful information about raising the animal, and though they may have a guarantee to take the pet back if it is deemed ill by a vet (within a short time), it often has many loopholes. The unsuspecting buyer ends up with an inferior animal for which he overpaid, at the very least. Pet store puppies are often harder to housetrain, and can suffer behavioral issues resulting from a lack of proper rearing during his informative first months. Don’t succumb to the urge to “save” the poor “doggie in the window.” You aren’t doing anyone, least of all dogs, any favors.

NOTE: Pet store clerks and managers are well aware that the pups they buy originate in puppy mills, because NO REPUTABLE BREEDER WOULD EVER SELL PUPS TO SOMEONE ELSE TO DISTRIBUTE! Pet stores are unable to purchase dogs from any other sources than puppy mills or unethical breeders.They are also savvy enough to know that consumers are finding out what horrible practices abound at puppy mills. Therefore, if you mention the words "puppy mill" in the vicinity of pet store employees, they are going to rapidly assure you (falsely) that, although other stores may buy from mills, "their puppies come from good breeders." They want you to think what you've heard about puppy mills supplying pet stores is all untrue. They are at risk of losing sales and getting bad reputations if the truth about puppy mills is disclosed, so their protestations and lies are simply attempts to make you feel dumb and get your money in the end. Pet stores that sell dogs WANT you to be a dumb, uneducated, soft-hearted soul who "loves animals." Don't fall for it!

More than likely, the “good breeders” that they cite as the sources of their pups are based in the Midwest, which is a sure sign they originated at a puppy mill (though puppy mills exist in many states, now, unfortunately, and bad breeders are EVERYWHERE). Pennsylvania is rife with puppy mills, and many of them are run by the Amish of the Pennsylvania Dutch region, who learned that running puppy mills was far more lucrative than traditional farming but still fell within the codes of their religious practices.

The bottom line? Do not spend your money in stores that retail dogs and cats, period! (Having homeless animals available for adoption through local rescue groups and shelters is perfectly acceptable, as long as this is verifiable.) Don’t even go into a store that sells dogs or cats, because you may be tempted to “save” something, or get into an unwinnable argument with an employee. Just stay away from these stores, and educate everyone you know about why they should avoid them, too.

For more information about puppy mills, please visit www.stoppuppymills.org. Although I do NOT agree with HSUS on several key issues, this portion of their site is informative. Other sites have info about puppy mills, but some are a bit over the top.

For more information about choosing the right pet for you and your family, read “Carpe Canem”

And, lastly, if you have already committed the treason of buying a dog or puppy from a pet store, don’t beat yourself up! I’m certainly not trying to. Spay or neuter him ASAP, train your dog thoroughly, and commit to sticking with him through any health or behavioral issues that may crop up–as any responsible dog owner would do. Most importantly, learn from your mistake, and don’t repeat it. Acquire from a more responsible source next time! Dogs across America will thank you!

3 Replies to “It Oughta Be A Crime”