Deprecated: Hook elementor/widgets/widgets_registered is deprecated since version 3.5.0! Use elementor/widgets/register instead. in /var/www/wp-includes/functions.php on line 5758
 The Crate is Great - The Pooch Professor
Skip to content
May 29, 2019 byMailey McLaughlin 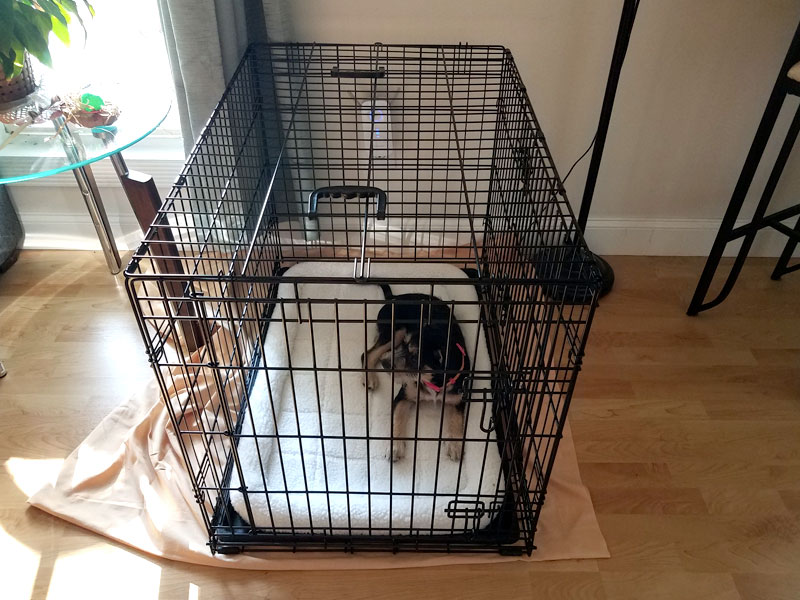 Helping your dog to like, even love, his private space

So, you’ve got this great dog. Maybe you just got him, or maybe you’ve had him for years. He’s adorable, he’s smart, and he loves you.

He’s got a ton of positive qualities: loves to play, makes you laugh, and is so happy to see you when you get home from any absence that his entire rear end wags from side to side. He can find and bring back a ball that was lost in the tall grass. He walks great on the leash. He learns quickly, and was a star in his obedience class.

But he doesn’t like his crate. And he’s not mature enough to leave your stuff alone when you are gone.

Many dogs love their crates, and happily go in them when the door is left open. They view them as a safe space, a den, a place to get away from it all. And even if they don’t love it, they willingly enter it, because you ask them to. They’d rather be with you, but, they shrug and go in. However, some dogs didn’t get the memo.

Why do some dogs resist the idea of the crate? It could be a lack of exposure to it (or any confinement), or a negative association with it in the past (being crated too long, or shoved in there angrily as punishment, among other things). A very small percentage of dogs are claustrophobic. Some have separation distress and cannot stand being separated from their humans, which is not really crate aversion at all. Some dogs feed off of their owner’s stress about crating (“I don’t want my dog to be in jail!”) and decide it’s a horrible place. Then, their owners can say, “See? He doesn’t like it!” and now we have a loop—an “undesirable-behavior-begets-undesirable-behavior” loop.

Can you fix this? Crate aversion isn’t the end of the world, first of all. There are worse problems your dog could have. And yes, you can confine your dog in another way (laundry room, baby gates, a bedroom), though none of those can match the crate for ease, efficiency, and proper training of structure and boundaries. Dogs left in bedrooms, laundry rooms, and bathrooms can still do a lot of damage, either from boredom or separation distress. Crates are preferred for confinement almost universally by trainers and pet professionals.

The type of crate you have might make a difference. Some dogs don’t care for the open wire crates with the slide-out tray that rattles. Some don’t care for the “Kennel Cab” plastic style. Switching to the other style may solve your problem (or placing a thick towel or blanket underneath the wire kind to insulate it from the floor and keep the noise down may help). Remember, the crate only needs to be large enough for Fido to stand, turn around, and lie down.

It’s worth it to try and fix a dog’s crate aversion if it can be done safely. Confinement isn’t optional for most dogs—especially in a new environment, or if they are not housebroken. Use a crate responsibly in the first months or years, and you can wean the dog off of needing it. Refuse to confine at all in the formative stages of your relationship, and you will have problems later.

So you have an otherwise healthy, happy dog who responds to you. Is he food-motivated? This will make your task much easier.

It’s best to do the following steps in short bursts, say, over a weekend when you are mostly at home. It may take a few weeks, or even months. But training sessions need to be short and always end on a success.

The following are general activities that can help make the crate a more relaxing place for the dog. Keep sessions short and positive. I’d have a leash on the dog until he starts enjoying the game, just so he can’t escape to another part of the house while you are trying to play.

Remove all bedding or items from the crate that the dog could destroy or ingest. Bones or chew devices that are non-consumable are OK.

Sit next to the crate with some delicious treats (small pieces of hotdog or other meat), and toss them in. Dog goes in and gets them, then is able to leave crate. You might start by just setting them inside the door at first. Put them there, and ignore the dog unless he goes for them. Praise as he goes to get them, then be quiet. Repeat 3-4 times, then quit the session.

Start shutting the door for a few seconds after the dog is fine with going in. Only allow dog out when it is quiet. Don’t leave during this time. This may take several sessions. Be patient.

When you get to the point where you close and latch the door, then leave the room for a brief period, place a worn t- shirt just outside the crate where it is unreachable by the dog, but he can smell it.

Return to the room when dog is quiet, and release without fanfare. Ignore the dog for a bit.

Vary these sessions over the next few days so that the dog
1.) Enjoys running in the crate because there is always a treat in there, and
2.) Never knows when the door will close and you will leave.

Crate the dog more when you are home, for short periods. Ignore barking or whining. Reward by calmly releasing him from the crate, and walking away. Do NOT praise or otherwise reward him when you do this.

Feed all the dog’s meals in the crate. You don’t need to shut the door at first, just set his bowl down just inside the open door and leave him for 10 minutes. If he is OK with this, and eats all the food, the next meal, put the bowl further in. Keep moving it in with each successive meal until he is running into the crate when he sees you coming with the food. Then start shutting the door while he eats, and let him out after 15 minutes or so. Do not leave food in the crate beyond this.

If the dog refuses to approach and eat if the food is inside the crate and he is not, put him in there with it, close the door, and give him 10 minutes. If he doesn’t eat, remove the food and try again with the next meal. He won’t starve if he misses a few meals. It may help if you sit next to the crate for that 10 minutes. Ignore him unless he starts to eat, then praise calmly.

If he simply will not eat and misses 4 meals in a row, go back to feeding him normally, outside of the crate (close to it is good), and up your efforts with the crate and treats (above).

Fill a KONG toy with a mixture of yogurt, peanut butter, and banana (or soft food), and freeze the Kong. Give it as a “pacifier” in the crate when you are about to leave. See KONG’s website for “recipes.”

Make sure the dog is eating, playing, getting walks, and other events at regularly scheduled times. Dogs feel safer with scheduling.

Make sure the dog is well-exercised, and mentally stimulated. A tired dog is a good dog.

The key to helping the dog be more comfortable in the crate is to make him think that going in there makes Good Things Happen. Be happy and praise all movement towards the crate, and make him want to go in.

Coming out of the crate is already rewarding for the dog, so be neutral and quiet during the release process.

Slow and steady is the way to progress here. If you have another way to safely confine the dog during your absences until he is comfortable with the crate, use it.

One Reply to “The Crate is Great”